For this week’s post, I thought I’d mention some of my favourite series of 2018. As some of you might know, I’m part of a Book Club. We read a book related to a different theme each month, which is super fun. I also attempted the PopSugar Reading Challenge in 2018, which I failed, big time. I read a total of 57 books last year, but only filled 34 out of 50 prompts for the challenge. Oh well, I tried…

So yeah, you could say I love reading! I just recently downloaded the Kindle app on my phone just so I can get those $1.99 books!

Now, just to clarify, when I say ”Favourite of 2018”, I mean that that second book came out in 2018. Some of the series are finished, and some of them will get additional sequels.

Without further delay, here’s my top 3 (in no particular order)

This is a duology, meaning that this is it. It’s over. Done. Which, as you can probably tell, I am so not ok with. I need more of this universe, these characters, and this story! I’m thinking the author, Marie Lu, knows this and might eventually surprise us with some bonus material as she did with her trilogy ”Legend”.

Warcross is the story of Emika Chen, a broke Bounty Hunter from New York who’s (like everybody else on the planet) obsessed with Warcross. What’s Warcross you ask? Just the most popular virtual reality game in the world, no biggie. You play the game with Neurolink glasses invented by Hideo Tanaka (also the game creator, and young, and hot… obviously!)

The story basically starts when Emika tries a hack during the opening game of the Warcross Games (think virtual Olympics almost) and boy does it not go according to plan!

I don’t want to spoil much, but let’s just say that most of the story takes place in Tokyo. That, if I wasn’t married, I would be VERY into Hideo Tanaka (still lowkey am…). That even though I would probably be terrible at it, I would most likely spend my days playing Warcross if I had the Neurolink. And finally, can someone start working on those glasses ASAP please?

This might be one of my all time favourites and I highlyyyy recommend reading those books! 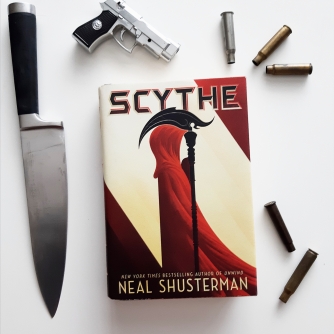 There is a third book coming out at some point for this serie. I’ve read interviews by Neal Shusterman, the author, and there is not one single mention of a release date that I could find! NOT ONE! Not even the year, nada! I guess we’ll have to wait… and wait… and wait…

In the future, humankind uploaded their collective knowledge and, well, basically minds, into the Thunderhead. Think a massive, sentient version of the Cloud. The Thunderhead not only knows and sees everything, but it also communicates with people. Due to the Thunderhead reign, humankind conquered Death. People no longer die of natural causes (medicine is far too advanced) or from accidents (cars are self-driving and the Tunderhead controls everything else). Thing is, people still need to die since the planet can only hold so many.

This prompts the creation of the Sythedom. Which is exactly what it sounds like. The story follows 2 Scythe initiates that are very different. Through their apprenticeship, we learn that there’s a lot of ways to be a Scythe, and that some Scythes are actually terrible!

This is a fantastic read, that shines light on a future that might not be as distant as we would think… 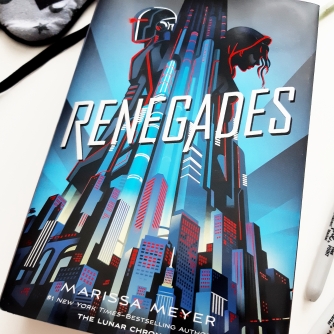 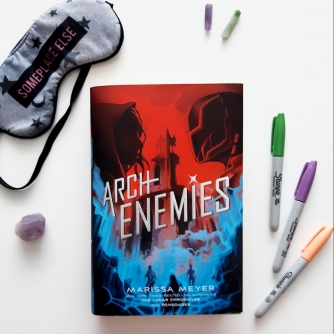 It took me a long time to pick up that book. I didn’t really enjoy Marissa Meyer’s previous hit ”Cinder” so I didn’t think I would like this book as much as I did.

It’s a take on the ”In-the-future-some-people-have-special-abilities-for-X-reason” trope. Which is a trope that has been slightly overused in the last 2-3 years but that I loooove! The main reason why I loved ”Renegades” and the sequel ”Archenemies” is because the characters are so likeable!

Nova has a weird ability. She doesn’t sleep. Ever. She can also put people to sleep (making her the perfect babysitter) for as long as she wants. Like all the kids, she looks up to the ”Renegades”, a gang of bona fide Super Heroes. They do say to not meet your heroes. She does, or actually, she doesn’t… We follow her through her teen years after a wild childhood. Again, trying not to spoil anything makes for a weird summary but there you go.

It’s a great read and even though the books are quite long, they’re so good that reading them feels like no time has gone by. Give it a try! Oh, and there is a sequel coming up!

Let me know what are your favourites in the comments, I’m always looking for new material, especially since I’m not doing the PopSugar Challenge this year!

This site uses Akismet to reduce spam. Learn how your comment data is processed. 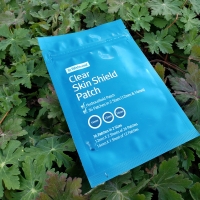